A library to help content creators package up Scenes and Adventures to solve several frustrations when importing Scenes from a module compendium. With Scene Packer the following works:

In summary, it makes importing a Scene from a Compendium (via an "adventure module") work as though you build it in your world. You could even use this module as part of a "shared compendium" where you keep linked Journals for use in multiple worlds.

Scene Packer is system agnostic, it doesn't matter whether you're packaging up a D&D5e module, or a Pathfinder one, or an Alien RPG one, Scene Packer doesn't mind.

Where do I start?

I have put together a site to help build your first module (with or without Scene Packer integration). It takes all of the guess work out of creating your first module, and in a lot of cases means that you don't have to do anything in a text-editor. Simply fill in the form and download your ready-to-go module zip file. https://sneat.github.io/scene-packer-module-generator/

There is also a how to tutorial video which you can follow along with:

Scene Packer also contains an Asset Report (accessible via the bundled Macro or by right clicking on a Scene in the sidebar) which details which assets will have broken references when imported into someone else's world. 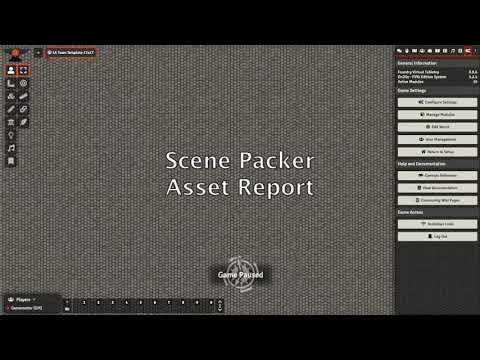 There are several Journal entries bundled with Scene Packer. In them, you can find references on how to use Scene Packer both as a Content Creator and as a GM.

If you would like some help packing your module, feel free to stop by my Scene Packer discord server and I'll happily help.

There are several Macros included in the Library: Scene Packer compendium entry. Each macro has a comment at the top describing its purpose.

Support for packing Scenes with embedded Quick Encounters data was added in v2.2.0 of Scene Packer. There is a Journal Entry bundled in the Scene Packer compendium which describes how to pack these scenes.

You can view an example module that showcases Scene Packer's features at https://github.com/sneat/example-scene-packer

A portion of the code is based on code created by honeybadger and used with permission.

Thanks to Baileywiki for their initial testing and feedback.

Please submit any issues via the Bug Reporter module or via GitHub Issues.

You can contact me on Discord blair#9056 either on the Scene Packer server, or the Foundry VTT server if you have questions, comments, queries, concerns etc.

If you are making money and utilising this module, please consider sending a few dollars my way and/or providing me with the cool adventures and modules you are building :)

Blair, the talented coder behind the Scene Packer module, has come out with his latest enhancement: the Foundry VTT Module Generator. Let’s learn more about Blair and his project! You can follow Blair’s work on his Discord as[…]
JDW September 21, 2021 0
Classic
The Forge

From there, you can either search for the package unique name: scene-packer or copy its manifest URL: