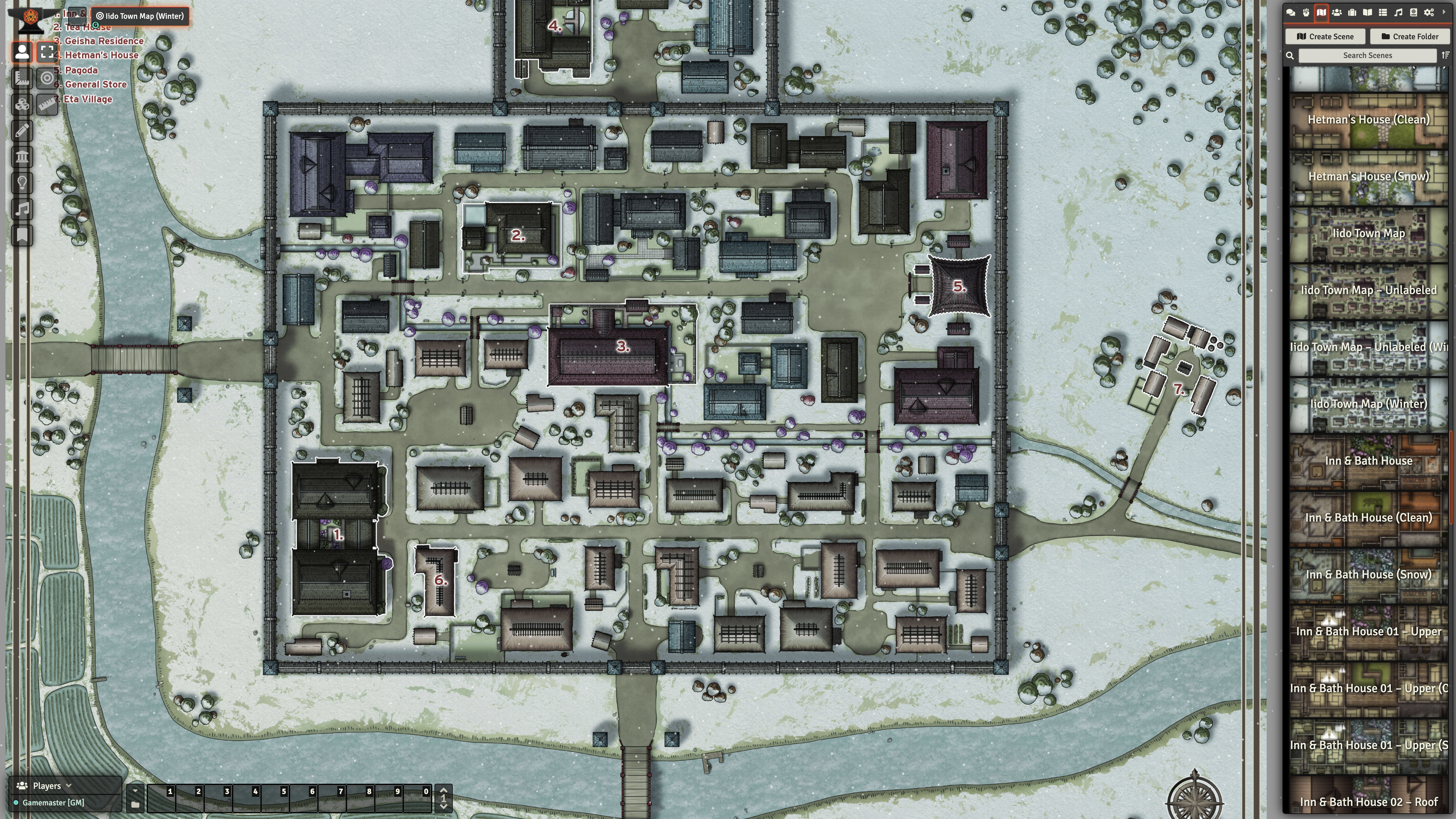 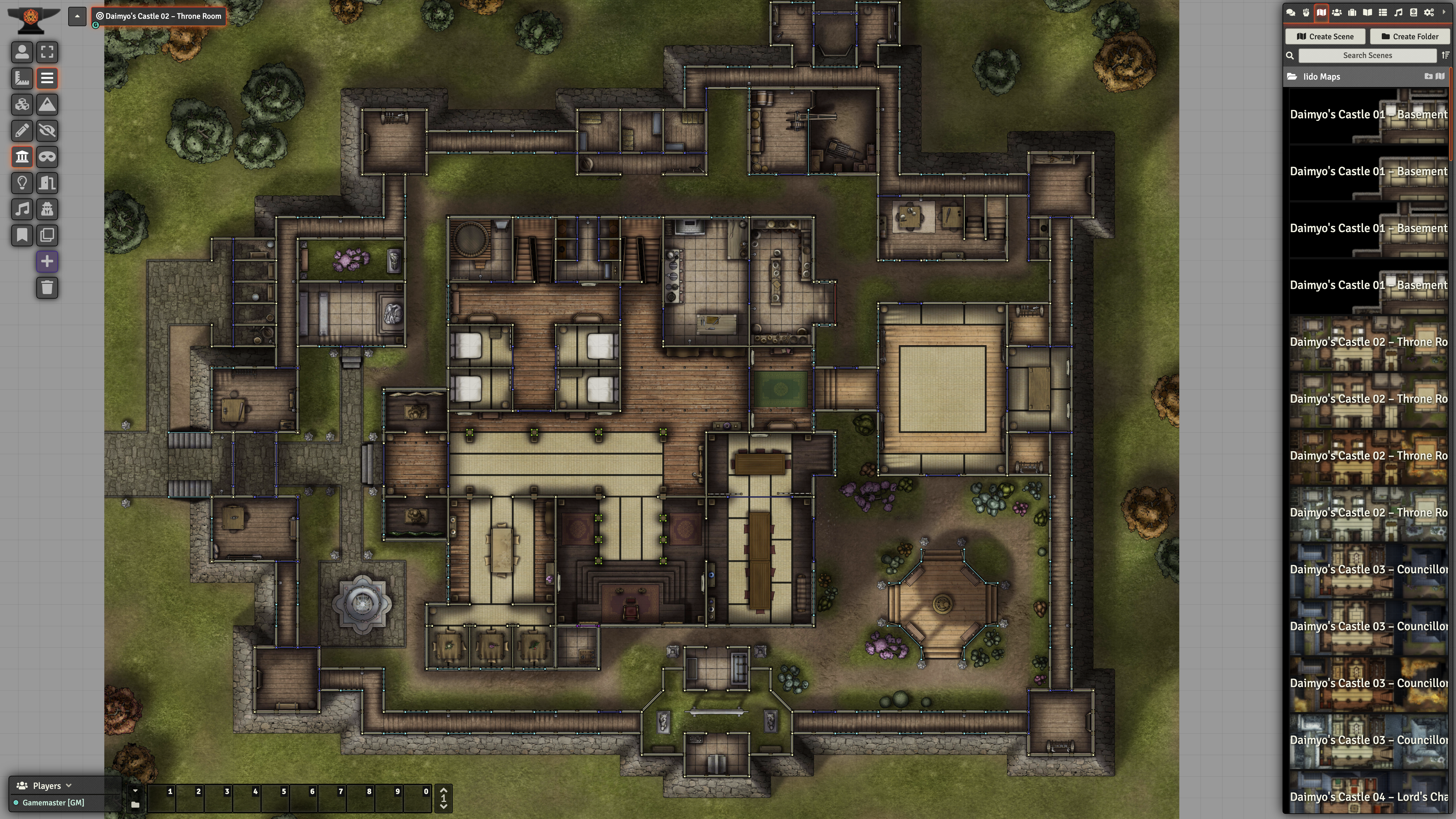 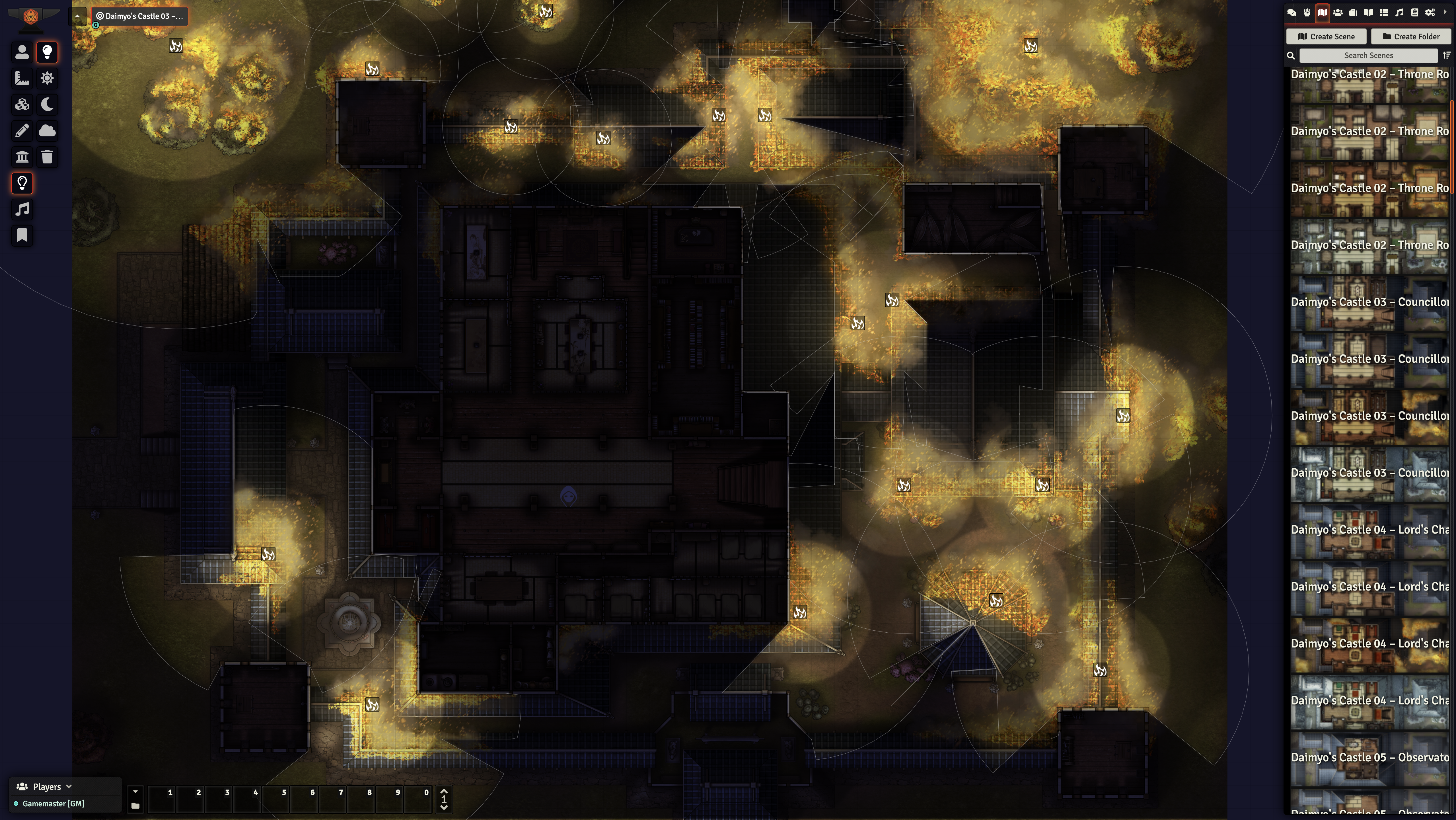 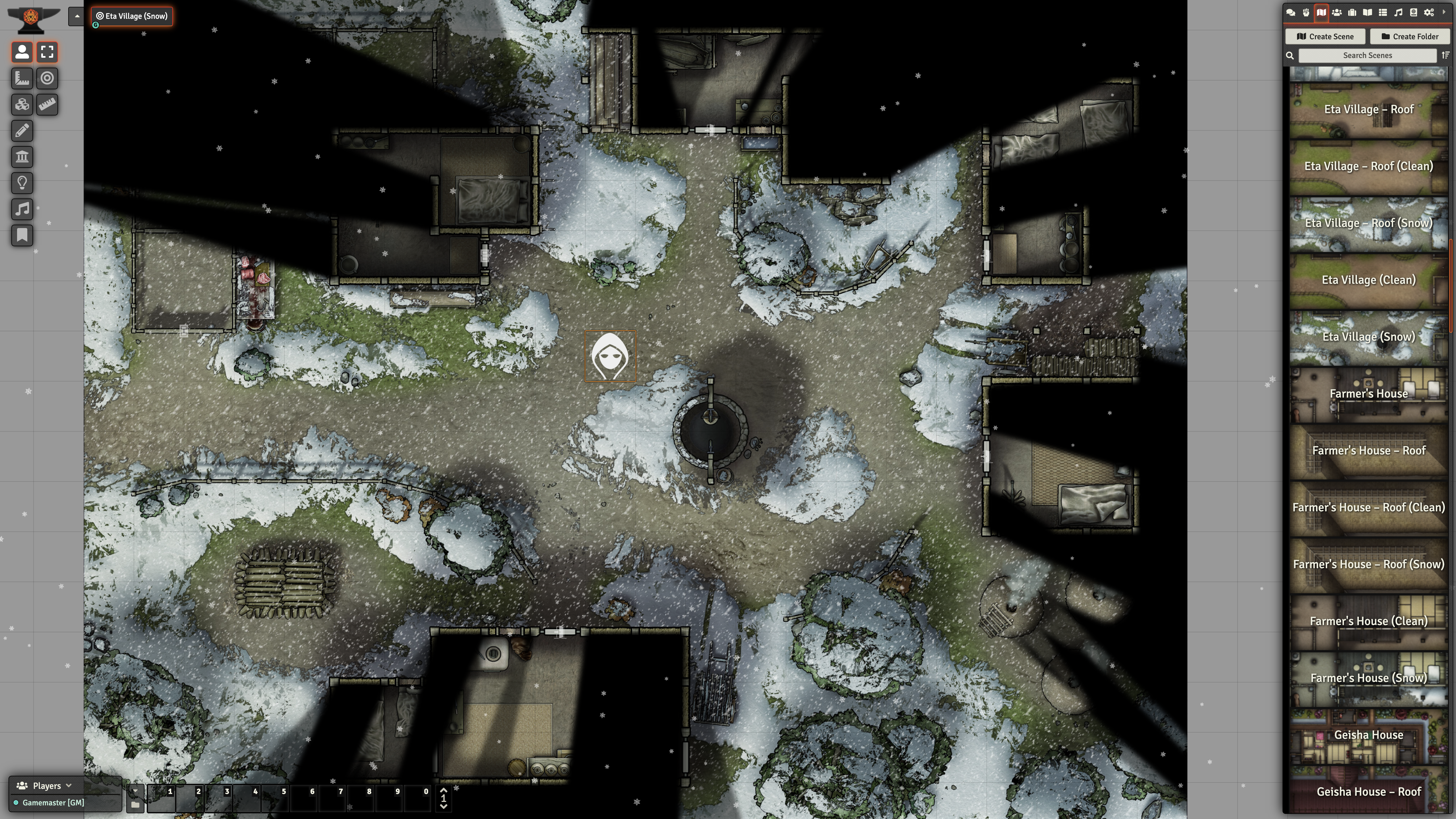 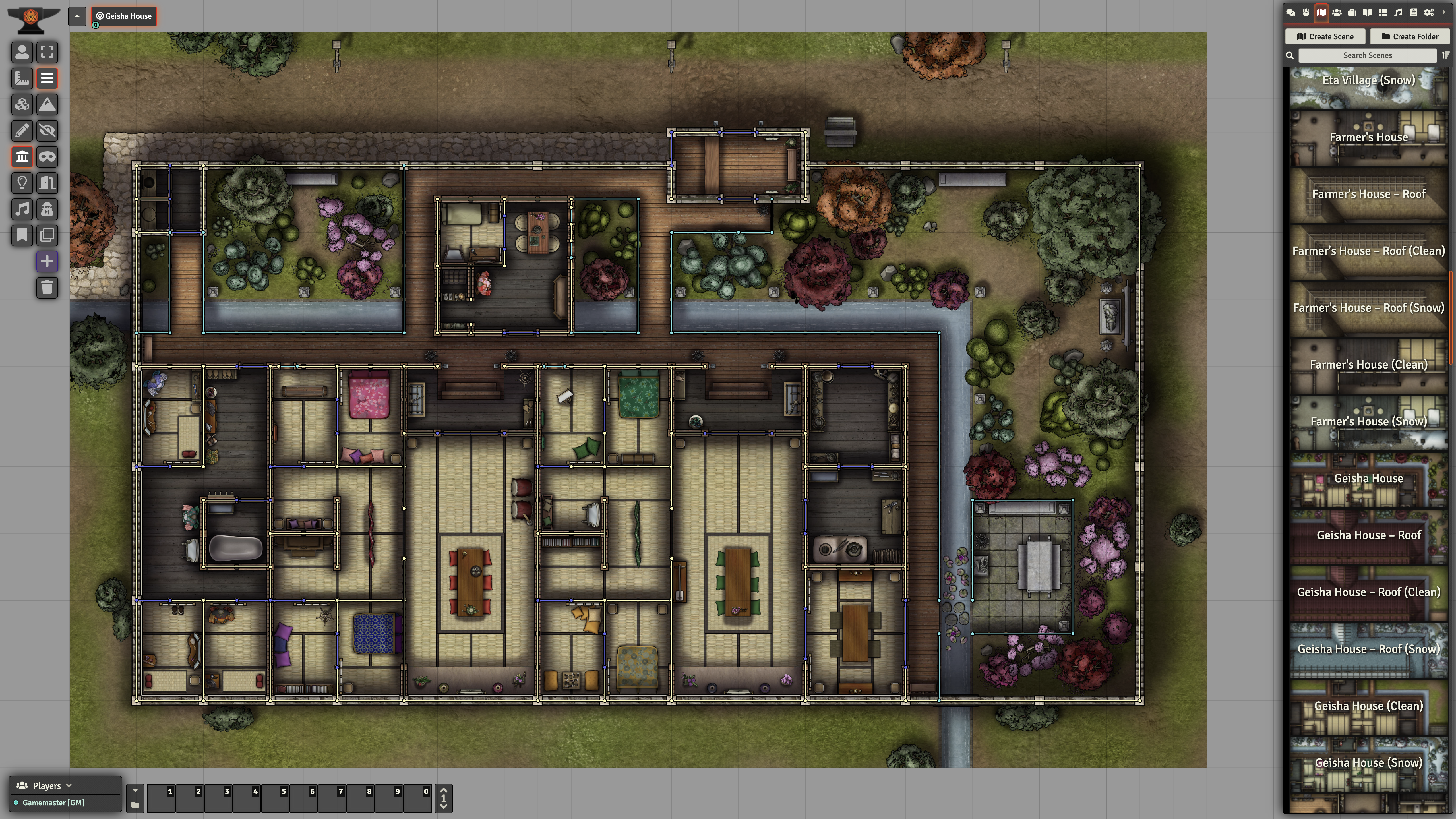 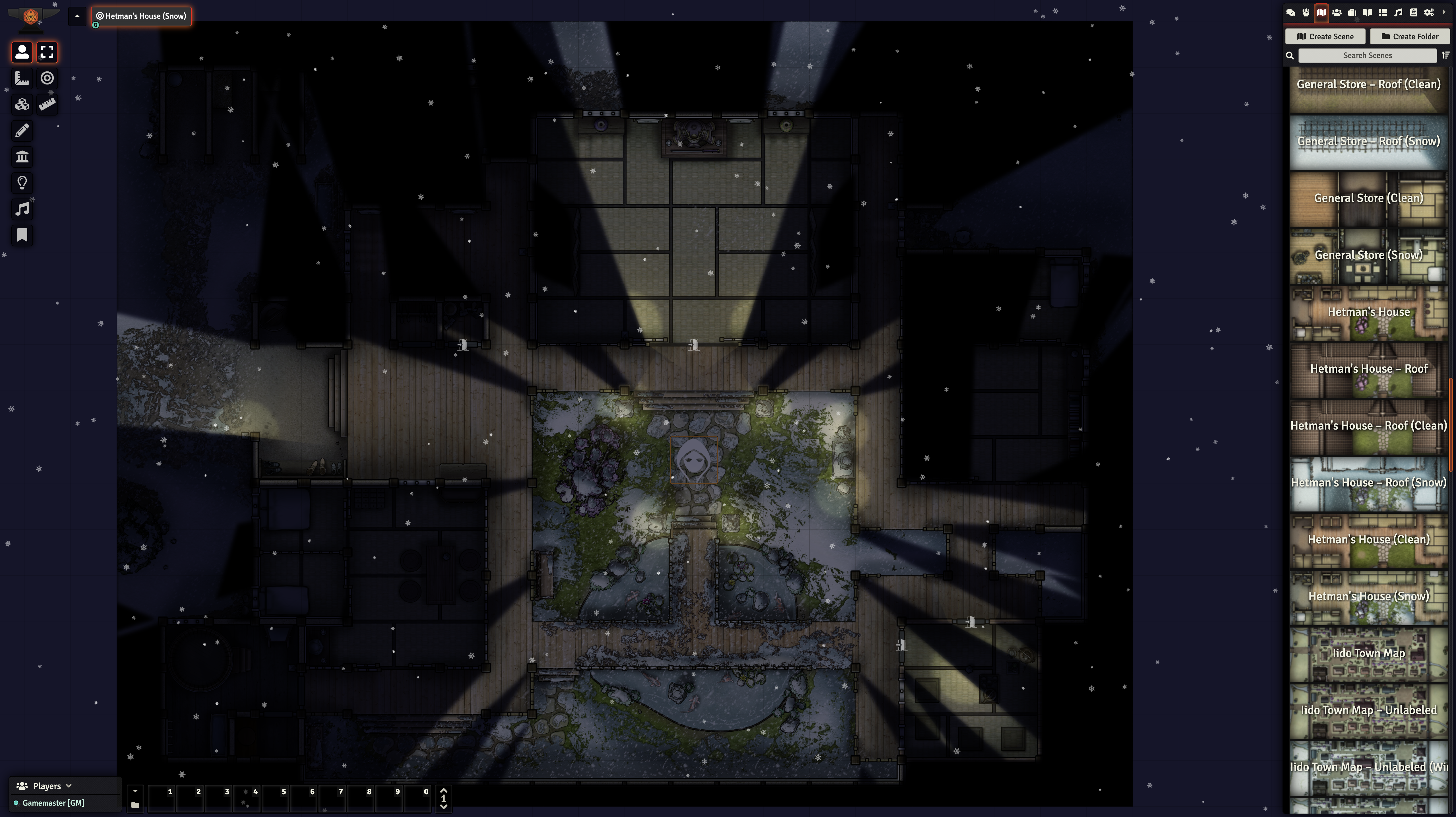 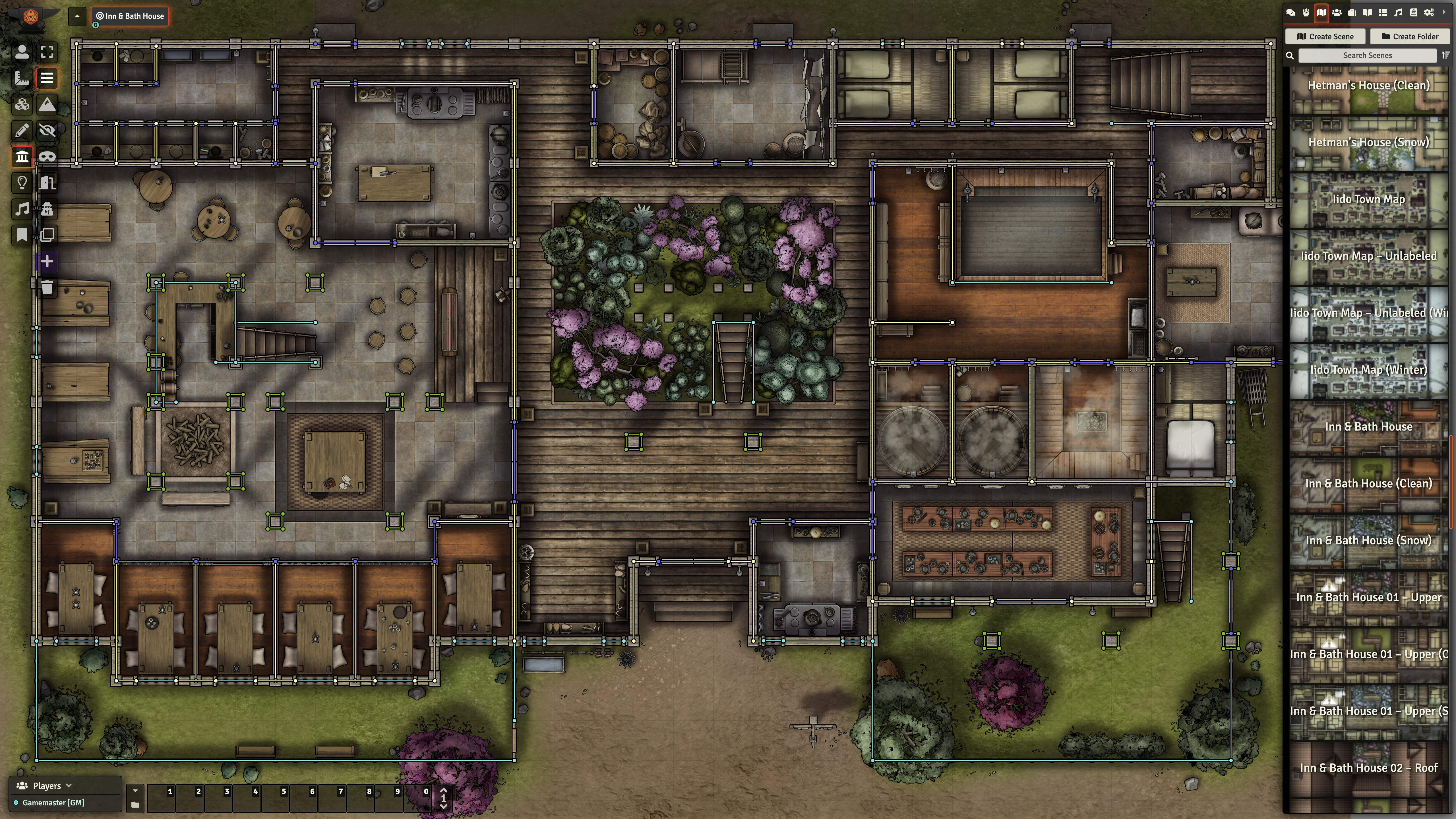 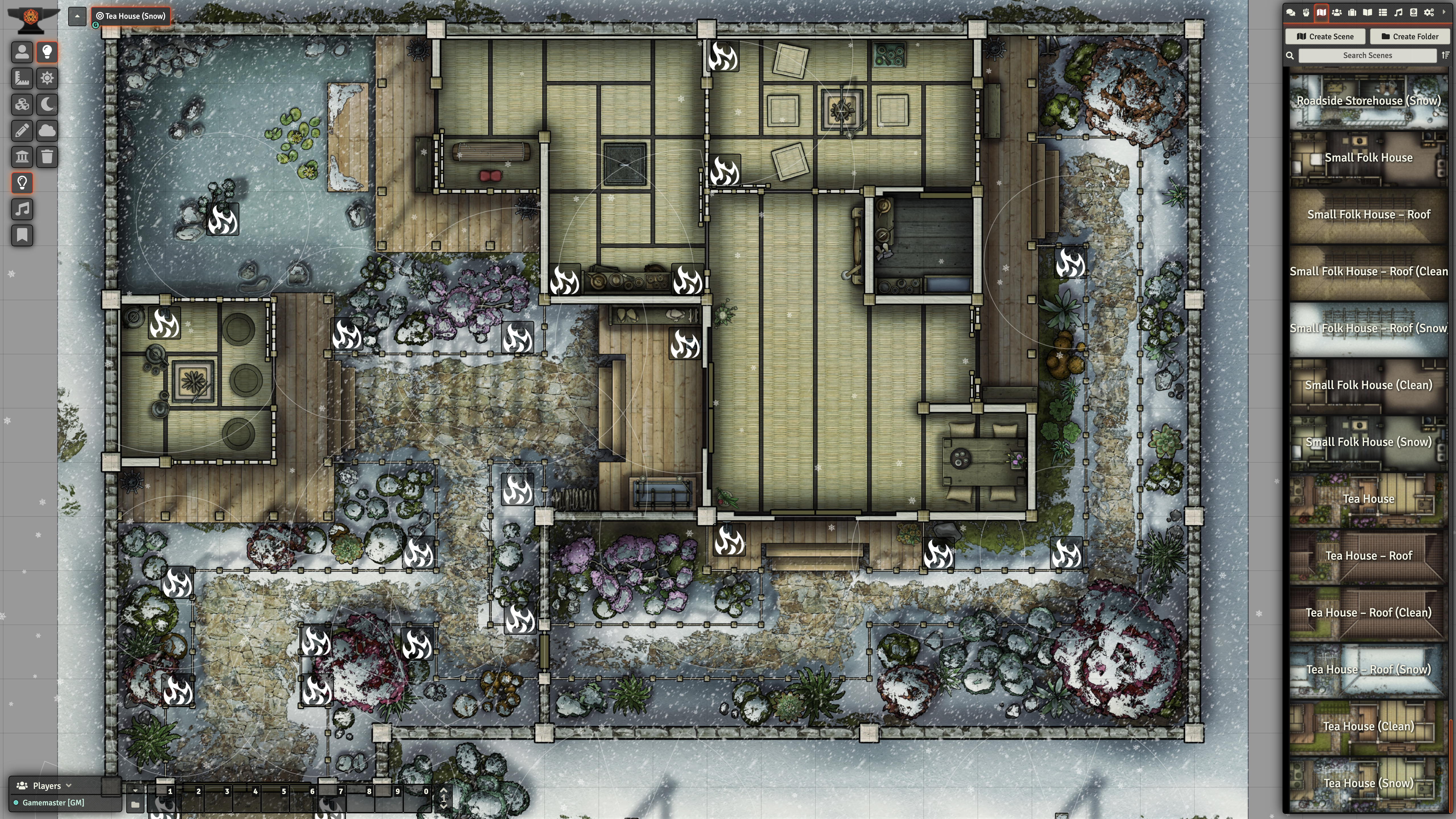 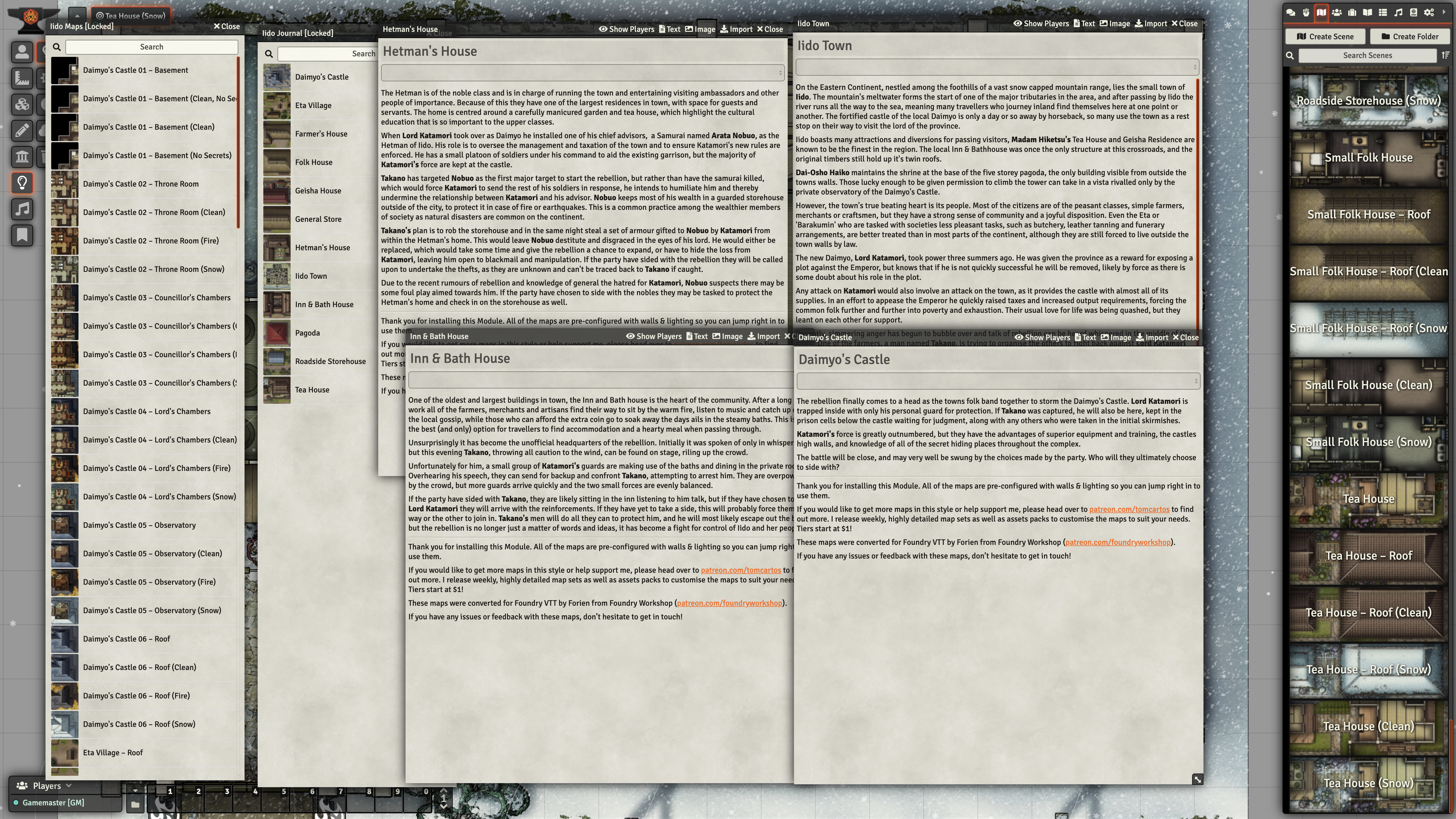 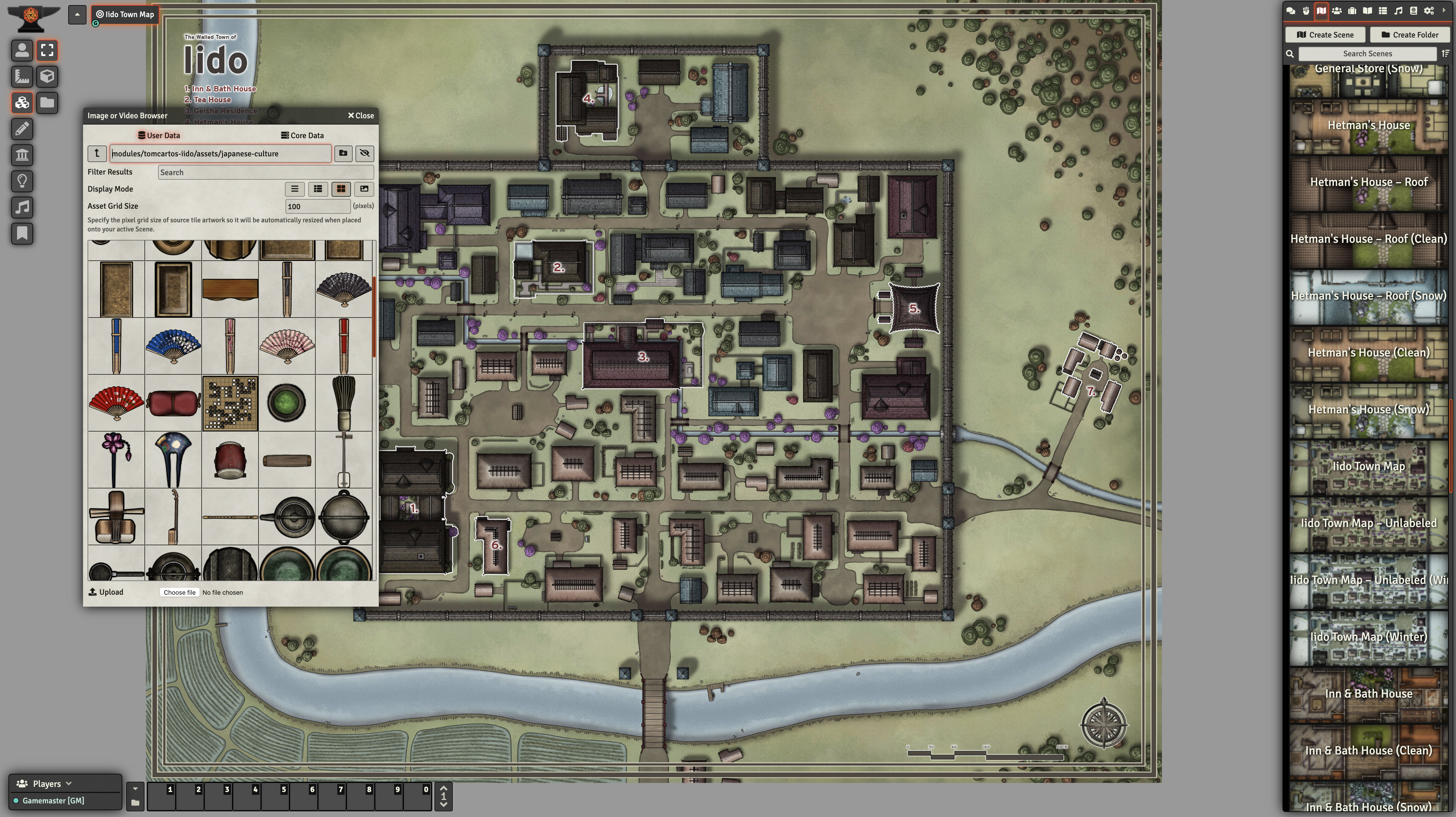 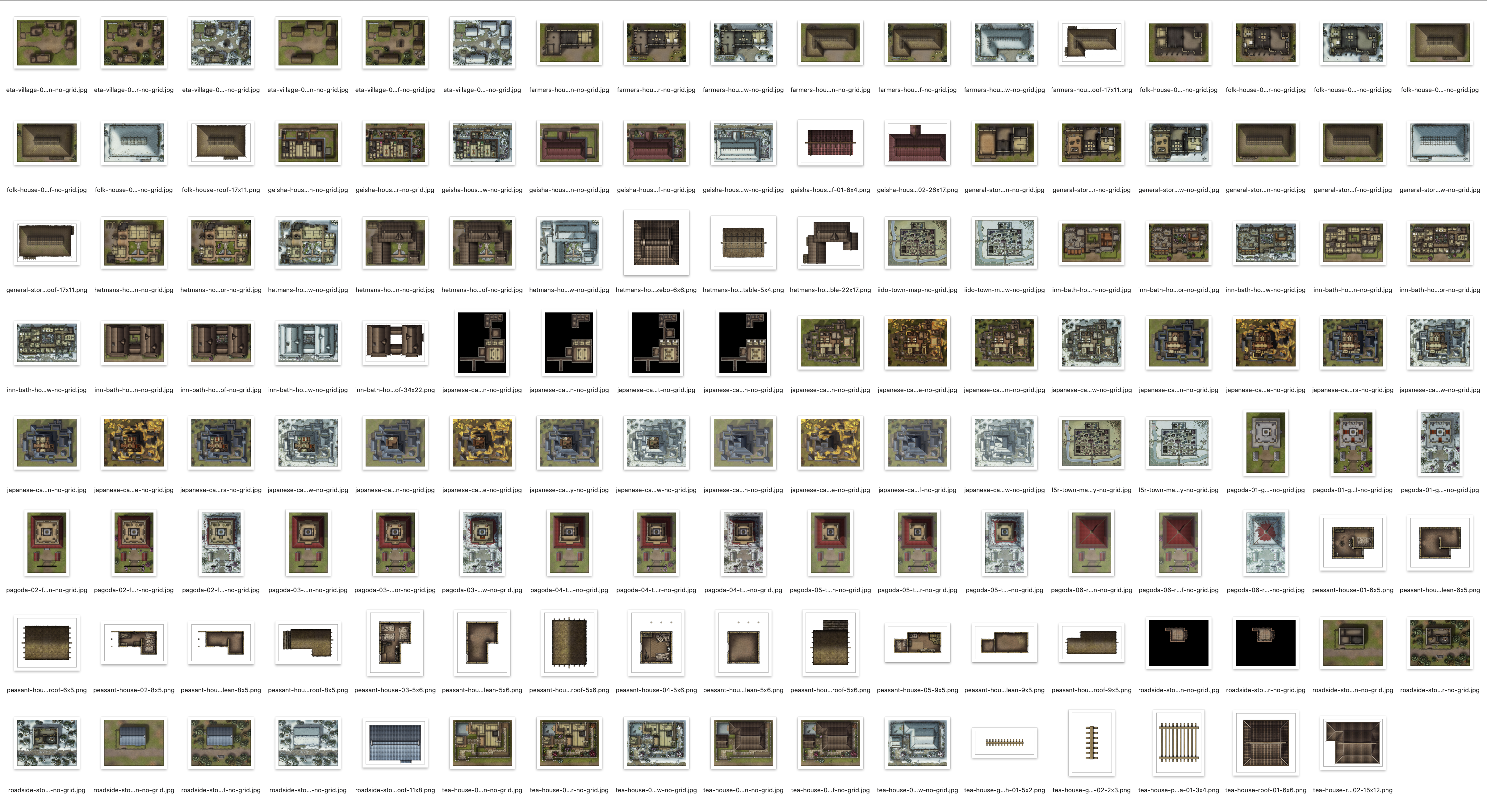 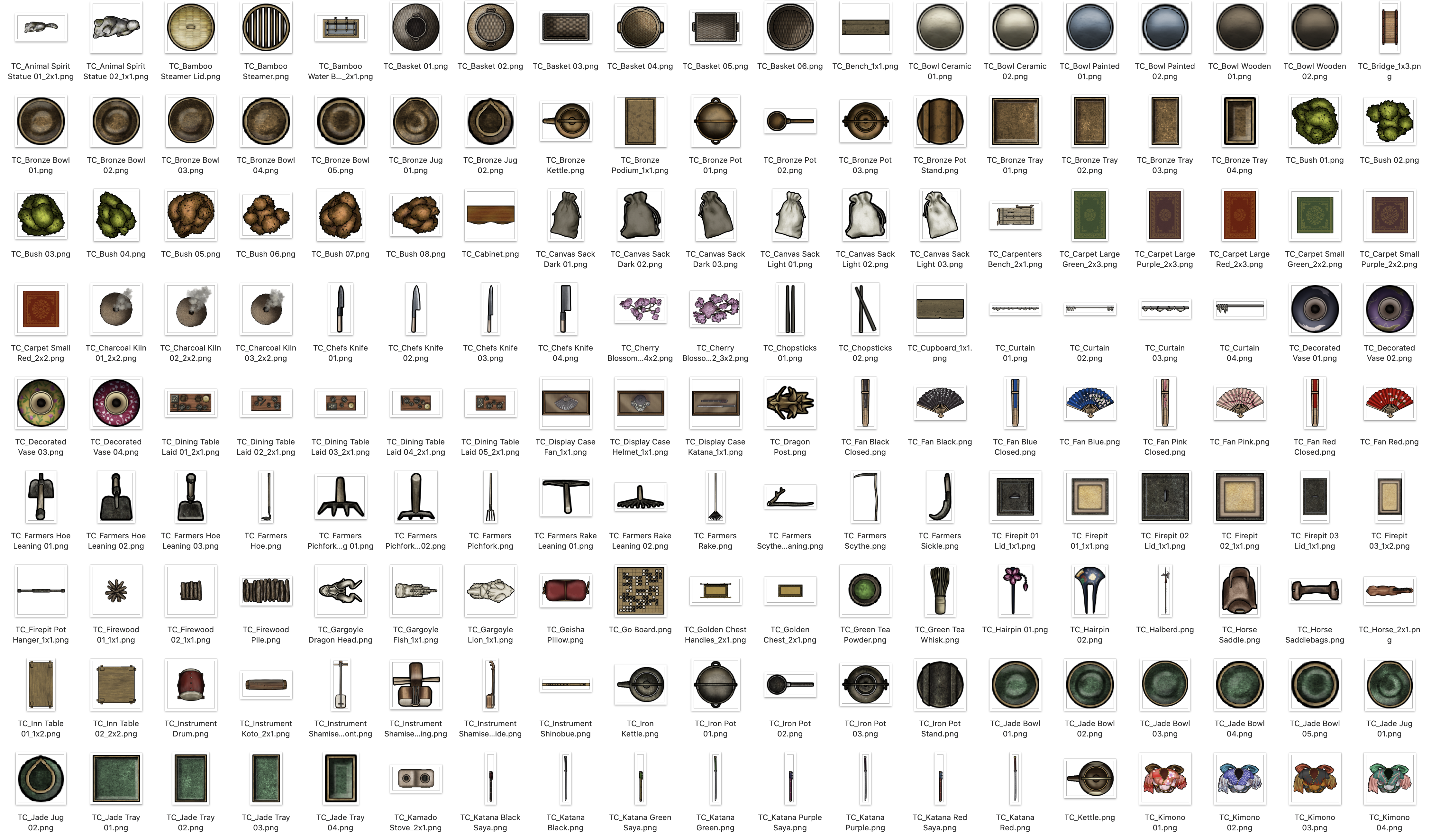 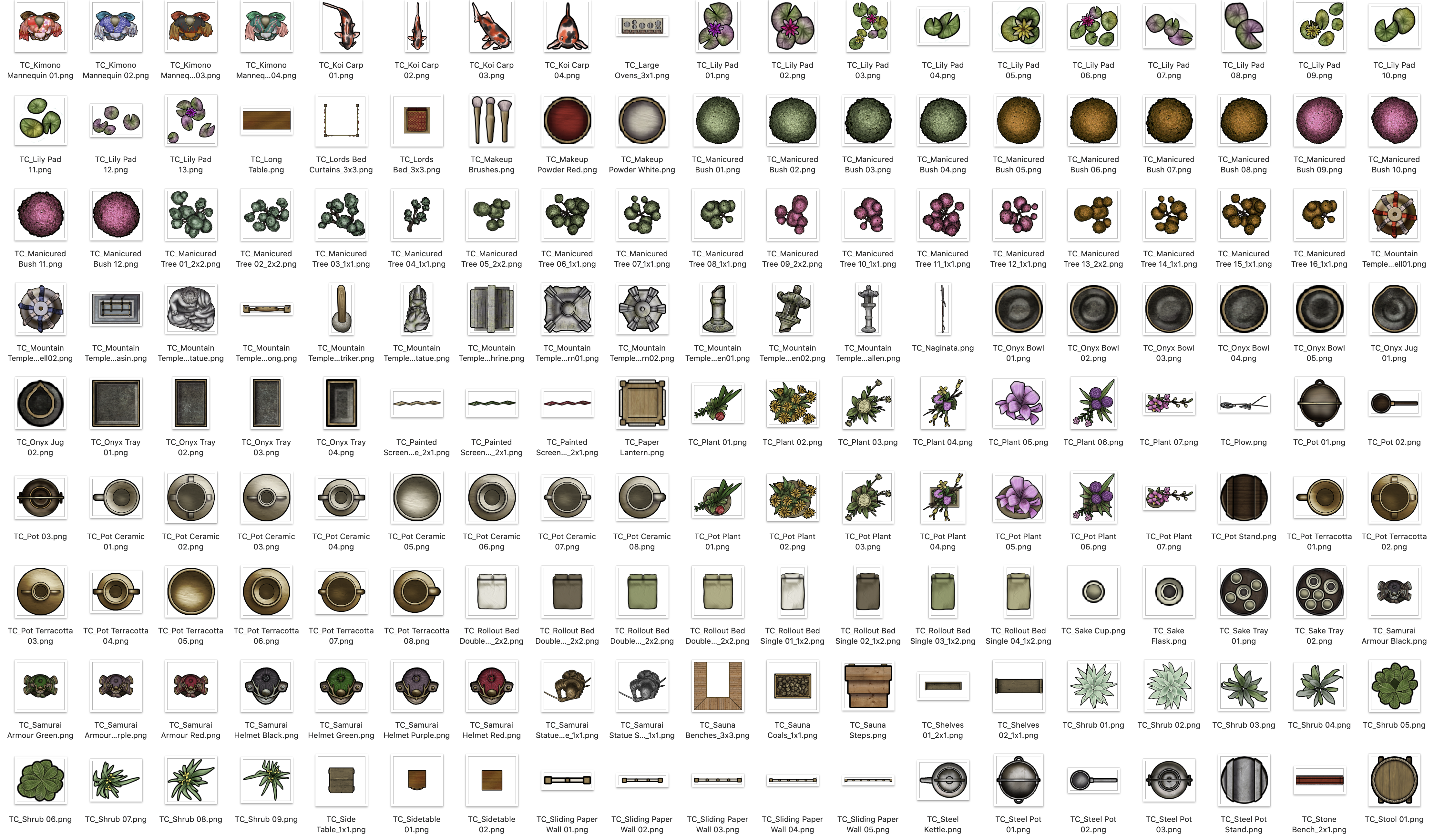 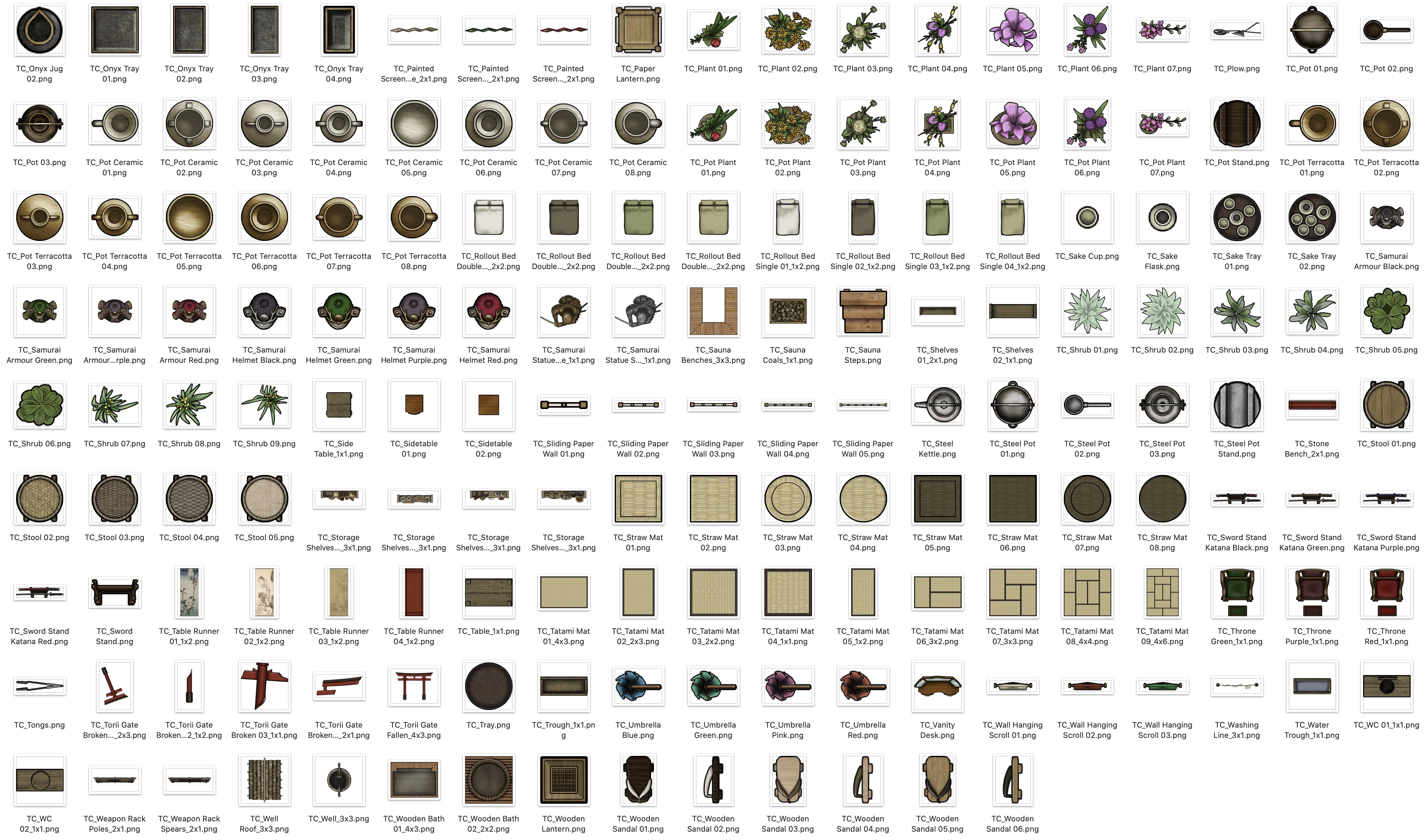 On the Eastern Continent, nestled among the foothills of a vast snow capped mountain range, lies the small town of Iido. The mountain's meltwater forms the start of one of the major tributaries in the area, and after passing by Iido the river runs all the way to the sea, meaning many travellers who journey inland find themselves here at one point or another. The fortified castle of the local Daimyo is only a day or so away by horseback, so many use the town as a rest stop on their way to visit the lord of the province.

Iido boasts many attractions and diversions for passing visitors, Madam Hiketsu's Tea House and Geisha Residence are known to be the finest in the region. The local Inn & Bathhouse was once the only structure at this crossroads, and the original timbers still hold up it's twin roofs.

Dai-Osho Haiko maintains the shrine at the base of the five storey pagoda, the only building visible from outside the towns walls. Those lucky enough to be given permission to climb the tower can take in a vista rivalled only by the private observatory of the Daimyo's Castle.

However, the town's true beating heart is its people. Most of the citizens are of the peasant classes, simple farmers, merchants or craftsmen, but they have a strong sense of community and a joyful disposition. Even the Eta or 'Barakumin' who are tasked with societies less pleasant tasks, such as butchery, leather tanning and funerary arrangements, are better treated than in most parts of the continent, although they are still forced to live outside the town walls by law.

The new Daimyo, Lord Katamori, took power three summers ago. He was given the province as a reward for exposing a plot against the Emperor, but knows that if he is not quickly successful he will be removed, likely by force as there is some doubt about his role in the plot.

Any attack on Katamori would also involve an attack on the town, as it provides the castle with almost all of its supplies. In an effort to appease the Emperor he quickly raised taxes and increased output requirements, forcing the common folk further and further into poverty and exhaustion. Their usual love for life was being quashed, but they leant on each other for support.

Recently, simmering anger has begun to bubble over and talk of rebellion can be heard whispered in the middle of the night. One of the farmers, a man named Takano, is trying to organise the others to fight back against Lord Katamori and retake the town for themselves. In an effort to improve their chances, Takano is also recruiting outsiders who are willing to help.

Katamori is aware of the resentment against him and is seeking to remove anyone who might incite an uprising in the town, offering a reward to travelling adventurers who provide information that leads to arrests. Any that seem particularly promising may be offered work as mercenaries, tasked with rooting out the rebellion entirely. Katamori knows that a rebellion would be seen as a failure on his part, and would result in swift action from the Emperor’s forces. He wishes to protect the town (and himself) from this fate.