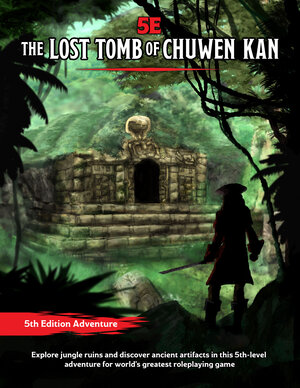 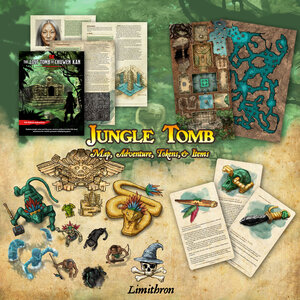 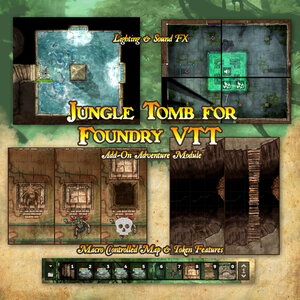 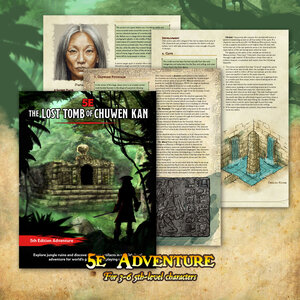 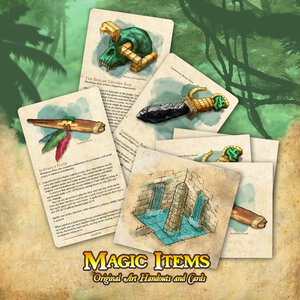 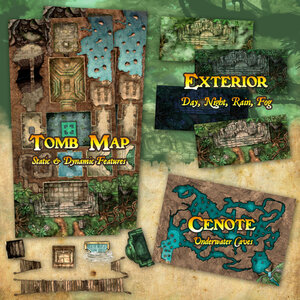 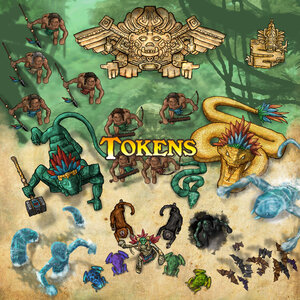 The Lost Tomb of Chuwen Kan is a 5E adventure for a group of 3 to 6 5th-level characters.

I proudly present to you The Lost Tomb of Chuwen Kan, a map, token, item, and adventure pack. This release features several newer endeavours for me: front and back cover illustrations, two puzzle illustrations, 20+ creature tokens, 7 maps, 3 magic items, and a 20 page 5E adventure, all by yours truly!

Ancient tales and local legends tell of a powerful king and queen, and a magical artifact given to them by the gods. Somewhere deep in the jungle lies a ruined temple filled with secrets, puzzles, and treasure... and much, much more. Can you you discover The Lost Tomb of Chuwen Kan?

This 5E adventure, written and design by yours truly, is balanced for 5th-level characters but can easily be scaled up or down. It includes illustrated puzzles & handouts, and the encounters, puzzles, and traps are designed with several solutions to accommodate different play styles.

This pack includes 2 maps of the tomb. The "static" version has all the essential elements and is ideal for quick encounters or for printing, while the other has features like hidden passages revealed and the rope bridge removed. Transparent tokens and tiles are included so you can turn these features on and off as your players explore and solve puzzles.

Also included is a massive 57x39 cenote underwater cave map. This can be used for the escape scene in the adventure, as an alternative entrance into the tomb, or as a totally separate adventure.

Also included is an exterior map of the temple with four variations.

I've always hated when you have a really great map, but your tokens don't match the art style... so I did something about it! This pack includes up to 28 creature and NPC tokens including:

I really wanted to challenge myself on this release, so I've created by first magic items with illustrations. Each includes a handout and a printable item card. I also created two illustrations for puzzles in the adventure: a obelisk that emerges from a pool of water and a large mural.

The Lost Tomb of Chuwen Kan Foundry Module is a ready to play add-on adventure module for Foundry VTT. This module features interactive maps features, dynamic lighting, sound effects, pre-place monster and NPC tokens, integrated journals for every room, and 10 macros for controlling map effects like secret doors and puzzles. You can easily install it and add on to your existing world or campaign.