This system is based Boilerplate System @ Asacolips.

And I built the scaffolding for the system using Yeoman.

This is a system for the Foundry Virtual Tabletop.

(The data used is limited to Free Quick-Start.)

This is a game to be played with a rulebook in hand.

which are used under Chaosium Inc’s Fan Material Policy.

This project is not published, endorsed, or specifically approved by Chaosium Inc.

Install this throught the system installer using the following manifest:

or by downloading the system and placing it in the systems directory.

Call of cthulhu 7e system created by Sandy Petersen in 1981 and revised by Mike Mason and Paul Fricker for the 7th edition released in 2015.

Japanese version translated and released in Japan in 2020.

Call of Cthulhu is a horror-themed roleplaying game based  on  the  writings  of  Howard  Phillips  Lovecraft.

Lovecraft penned a tremendous body of work during the 1920s and 1930s, concerning both horrors from beyond and from within.

Lovecraft’s most famous invention has become known as the Cthulhu Mythos, a series of stories sharing common plot elements such

as certain mythical books  of  arcane  lore  and  alien  god-like  entities.  If  you  have not read any of his stories it is strongly recommend

you do so. (Quote from quickstart guide)

This system does not offer advanced automation, but assumes that you will copy/paste the contents of the template compendium located

under the Character Sheet Template compendium.

This is because Japan uses different kinds of supplements which change skill names and rules, thus this sheet was created for

Japan audience use primarily, but feel free to use this english version if you please.

Combat is tracked through order of DEX attribute. There's a vehicle sheet template aswell for your chasing needs.

A DiceBot system is implemented in this system. If a skill value is entered after the command "/cc", the system judges success or failure.

And the combination command "/CBR" appeared.

Playing Call of Cthulhu is a horrible game that asks for immorality and commits blasphemy.

It's important for everyone to enjoy playing the game. 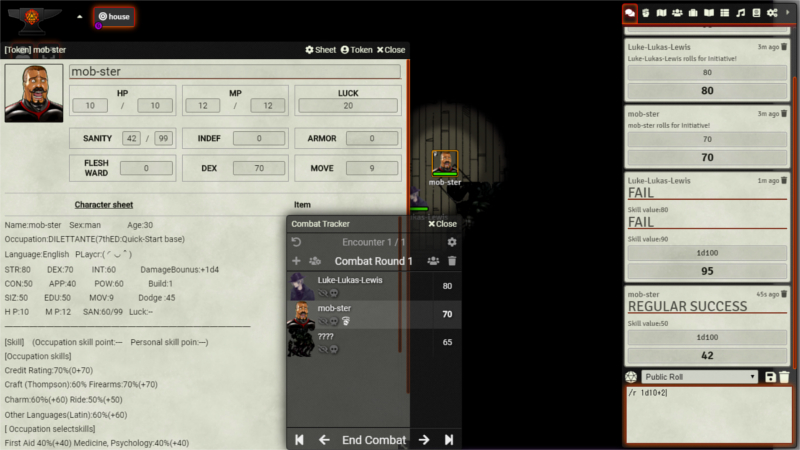 From there, you can either search for the package unique name: callofcthulhu or copy its manifest URL: